Breakdown of the Key West Subdivisions

·         New Town: New Town is where the majority of the locals live. The prices are slightly lower. The yards are generally larger. Most of the houses have off-street parking which is rare in Key West. New Town tends to be quieter than the other subdivisions and does not have nearly the traffic of other areas of the island.

·         Mid Town: Mid Town is somewhat similar to New Town. It is a little closer to downtown. The lots are still large for Key West but not as large as New Town. Not as many houses offer off-street parking.

·         Casa Marina Area: The Casa Marina Area is one of the more expensive areas in Key West with the houses starting about $1,000,000 and going up well over $3,000,000. The houses are larger, the lots are larger and it is close enough to downtown that you can walk or bicycle yet it is still a very quiet neighborhood.

·         The Meadows: The Meadows is one of the most sought after neighborhoods in Key West. It borders Old Town yet it is still quiet. Not many houses have off-street parking but finding parking on the street is very rarely a problem. You can easily walk to Duval Street from The Meadows.

·         Old Town: People tend to either love Old Town or hate Old Town. There is a lot of tourist traffic, guest houses and it is noisy. Very few houses have off-street parking and finding parking on the street is difficult. Old Town is also very transient.

·         Bahama Village: Bahama Village is the most up and coming neighborhoods in Key West. If you’re in it for the long run this is the place to invest. Ten years ago I wouldn’t go near Bahama Village after dark but that has drastically changed. It is just a few blocks from Duval Street yet still quiet. Parking is very rarely a problem and it is a tight knit neighborhood where the locals all watch out for each other.

There is the breakdown of the major subdivisions and the advantages and disadvantages. I hope that helps you decide where you want to buy when you call me to show you houses.

It's a great day to shop for Florida Keys homes for sale. Two days in a row we have has more new listings come on the market in Key West... 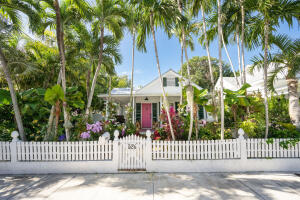